Shooting photos at Disney World can be a challenge. There’s tons (and tons and tons) of people constantly walking through the background and that’s a lot of commotion that can be distracting in photos.

My sister is graduating next weekend from UCF (my alma matter) and I had the idea to shoot some of her graduation photos at Epcot. It’s the International Flower and Garden Festival, so the grounds are covered in amazing floral arrangements. Epcot is by far the most beautiful on the Disney parks, so it made perfect sense.

After a full day of shooting some beautiful photos, I learned a thing or to about what it takes to get the perfect shot. Here are my five tips for shooting graduation photos at Epcot:

1. Get to the parks as early as possible

Getting to the parks right when they open guarantees the least amount of people in your shots. Also, since the parks open pretty early, it won’t be too hot and the lighting won’t be too harsh. We got to Epcot at 9:30. The park opens at 9 so it wasn’t too crowded. If you’re going to Epcot, the World Showcase doesn’t officially open until 11, but visitors can still walk through many of the countries before they open. We practically had the whole place to ourselves! 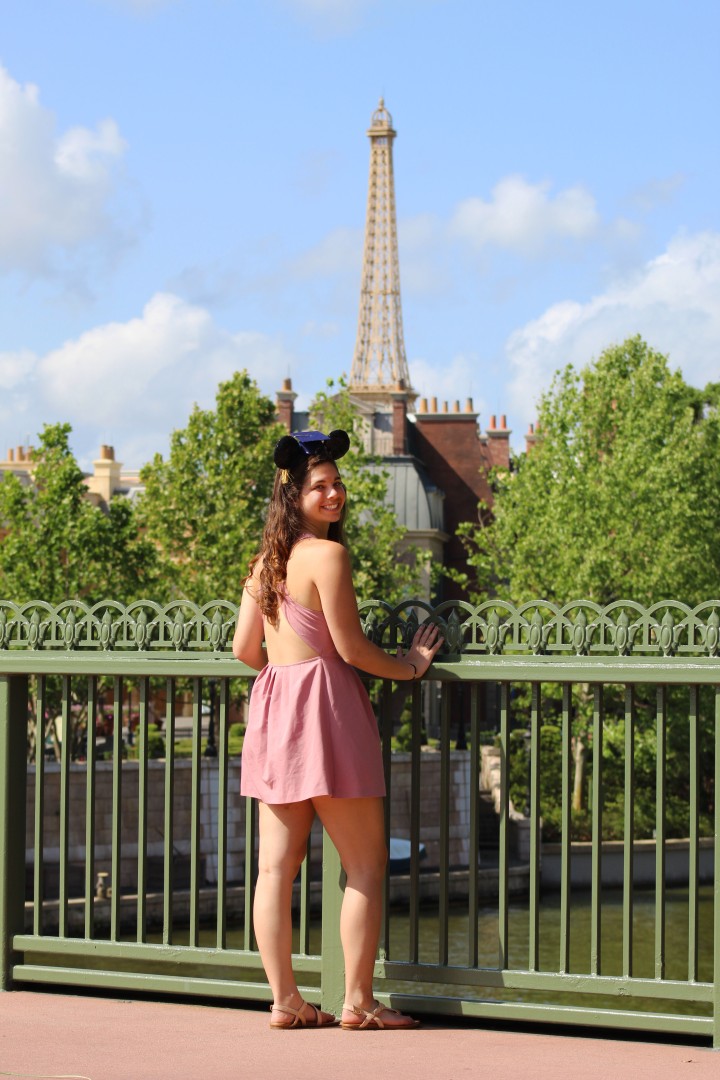 2. Find both neutral and Disney-themed backdrops

When doing a grad shoot at Disney, it’s obvious to have the model stand in front of Cinderella’s Castle of the Epcot ball. These shots are classic, and if you’re spending the money to take photos at Disney, you have to let people know that’s where you were. But, don’t forget about the great neutral or more understated areas of the parks to take photos in. At Epcot I took some shots in front of flowers and the iconic “Bubble Gum Wall” behind Spaceship Earth, in addition to taking some in front of the giant ball and some of the landmarks in the World Showcase. This gives your shots plenty of variety and also makes them more timeless.

3. Mickey ears are a must

What’s a Disney photoshoot without a pair of Mickey Mouse ears? There are several pairs that you can buy at any of the parks that feature a graduation theme. My sister chose this pair of Mickey ears with a tiny graduation cap on them. So cute!

4. Bring a change of clothes

Chances are if you’re going to Disney to take photos, you’re not going to just get a couple shots and leave. You’ll stay and enjoy the park too! So, I recommend having your model go to Disney in their photoshoot clothes, or if you’re a blogger like me and planning on taking your own photos, do the same. Pack a bag filled with your Disney essentials (see mine here) and then, once you’ve gotten all your shots, change into your comfy sneakers and clothes, and you’ll be ready for a full day of exploring!

Don’t forget: you’re at Disney World! You should not just be there to do a job, you should be having fun! Have your model pose with their favorite childhood Disney character, or with a signature Mickey ice cream. If you’re shooting a Disney OOTD, do some fun poses with a cast member or riding a ride. Memories aren’t just about the ones you capture on your camera, they’re also about the ones that will stay in your heart.

YEEHAW BACHES 🤠🍾✨
This girl runs off of iced coffee ☕️ and sunshine ☀️
Nothing beats a classic black one-piece bathing suit 🖤
Just call me Sporty Spice 🥎
Give me all the sundresses! 😍
When you find the perfect summer blouse 🥰